You are here: Home / Mind / The Only Explanation of the Actor-Observer Bias You’ll Ever Need

“Mary is just lazy! She should stop that fad diet thing and begin to exercise. She keeps looking for an easy trick, but it doesn’t exist”, Ann said. That certainly sounds like a common sense. Except that Ann is at least 50 pounds overweight and is in no position to criticize someone’s weight loss strategies or sedentary lifestyle. Her weight has been stuck at 200 pounds for as long as she can remember — she blames her parents and, perhaps, a mysterious health issue. “They always told me to finish everything on my plate”, she says.

Mary-Ann example is an example of the actor-observer bias where Ann is an observer and Mary is an actor. The actor is the one who acts and gets outcomes while the observer is the one who observes and judges the actor and themselves.

The Actor-Observer Bias vs. Locus of Control

Interestingly, the actor-observer discrepancy is more obvious in situations with negative outcome — we tend to blame people’s character when something bad happens to them. However, when the actor’s outcome is positive, we as observers tend to attribute that to external circumstances, such as having rich parents, good connections and sheer luck.

In addition, we are more susceptible to the actor-observer error when explaining behaviors of people we don’t know very well. When it comes to our friends and family members, however, we can be much more forgiving. Researchers suggest that we are less likely to succumb to the actor-observer bias with people in our close circle because we have more information about them, such as their way of thinking, their motivation and their circumstances.

Now that you learned about the actor-observer bias you may be wondering how is that different from the concept of fundamental attribution error. Aren’t they the same thing? Both terms are used in social psychology to describe attribution bias, and they definitely seem very similar.

The difference is that the fundamental attribution error focuses only on other people’s behavior while the actor-observer bias focuses on both.

To make things even more confusing, we have the concept of self-serving bias. The term “self-serving bias” refers to our tendency to see ourselves in overly favorable light in order to protect our self-esteem, and this involves attributing our successes to our abilities and hard work while blaming external factors for our failures. 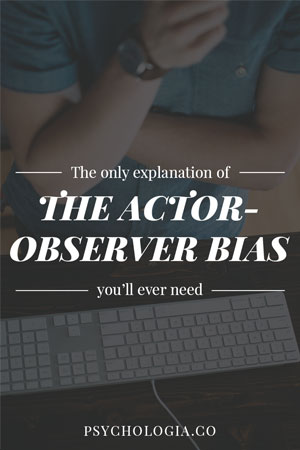