You are here: Home / Personality / ENFP vs. INFP: 31 Differences

ENFPs and INFPs are very similar to each other. Their main difference is their energy level and their different social needs. The ENFP is an extrovert while the INFP is an introvert, which means:

1. The ENFP is more energetic and enthusiastic than the INFP.

2. The INFP is more in touch with his or her inner world. 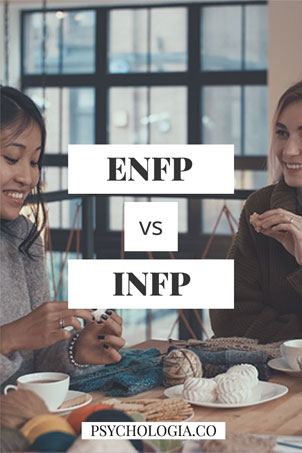 3. ENFPs have better social skills, and they tend to understand others better. They can predict other people’s reactions while INFPs may sometimes offend others with their offhand comments.

4. Although INFPs are very sensitive, they aren’t concerned with other people’s approval as much as ENFPs are.

5. INFPs are more independent than ENFPs.

6. ENFPs appear more positive than INFPs. INFPs may often seem distressed because of their tendency to overanalyze things and worry about everything.

8. ENFPs act on their ideas quickly while INFPs need time to reflect on things.

9. In conflict situations, INFPs are more likely to withdraw without being willing to discuss the problem at hand.

10. INFPs tend to hold grudges longer than ENFPs. They torture themselves by ruminating about their (often imagined) relationship issues. They simply can’t relax and let go.

11. The INFP is a more serious type. The ENFP usually appears joyous and bubbly.

12. The INFP tends to avoid essential issues only to explode later.

14. The ENFP speaks more readily while the INFP often pauses to think through what he or she wants to say.

15. ENFPs prioritize other people’s feelings and needs over their own while INFPs want to be someone’s priority.

17. ENFPs are more spontaneous than INFPs.

18. ENFPs appear more relaxed and at ease than INFPs.

19. ENFPs are more accepting of others, while INFPs tend to dislike certain types of people. For example, INFPs feel uneasy around very active and competitive types, such as ENTJs.

20. The ENFP produces lots of ideas and acts on them quickly, while the INFP takes time to make up his or her mind about anything. INFPs generally dislike people who frequently shift from one subject to another.

22. ENFPs are more comfortable with risk than INFPs.

23. The INFP takes almost everything personally while the ENFP is much more forgiving.

24. The INFP may be challenging to get to know, and as a result, he or she may be overlooked and underappreciated by others. The ENFP, on the other hand, is like an open book.

26. INFPs are more self-reliant than ENFPs.

27. Young INFPs may have a bit of a rebellious streak and may even argue with those who hold different values than they do. ENFPs are people-pleasers.

28. When INFPs make up their mind about something, they don’t give up easily and work until they reach their dreams. ENFPs, on the other hand, have many unfinished projects and generally tend not to follow through their plans.

29. ENFPs fall in love quickly and easily while for INFPs love is a serious commitment that is not easily attained.

30. ENFPs tend to idealize their partners and ignore their flaws. INFPs, on the other hand, have very high standards when it comes to love. It takes them a long time to find someone who satisfies all the criteria they have in mind, and even then INFPs may be having second thoughts regarding their partners’ suitability.

31. ENFPs are more concerned about their appearance than INFPs who don’t worry about such things.