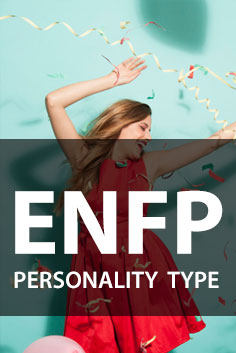 ENFP is one of the 16 personalities developed by Isabel Briggs Myers and Katharine Cook Briggs (Myers-Briggs) based on Jungian personality types.

ENFPs are incredibly energetic people that are known for being

According to some online sources, ENFPs account for about 7 to 8 percent of the general population.

However, David Keirsey, in his book “Please Understand Me II”, mentioned that this personality type is rather rare and accounts for only about 2-3 percent of the population.

Along with ENFJ, INFJ, and INFP, he classified this personality type as “Idealists”.

If you aren’t sure whether are an ENFP, consider taking this scientifically validated test.

Other names for ENFP

Many personality researchers expanded on the subject of the 16 personalities and gave each of them their own descriptive names. Here are some alternative names for ENFP:

Other online names include “The Campaigner”, “The Creative Idealist”, “Advocate”, “The Inspirer” and “The Hero”.

When compared to four classical personality types model, ENFP is very similar to the Sanguine-Phlegmatic temperament.

The four letters are used to describe type preferences, so ENFP stands for

According to Jung, extroversion and introversion can be only demonstrated when paired with the four functions — thinking, sensation, intuition or, feeling.

As a result, for each personality type, we get dominant, auxiliary, tertiary, and inferior functions.

Cheerful and energetic ENFPs view the world in terms of possibilities, and their wide range of interests reflects their curious and imaginative nature.

Things they are interested in do not necessarily have to be practical — as long as it’s stimulating, it’s good enough for ENFPs.

Always joyous and bubbly, young ENFPs spend a lot of time thinking about their future:

They spend a lot of time talking about their dreams and ideals, but it doesn’t mean they have everything planned in advance — in fact, it’s the opposite.

With their characteristic flexibility and spontaneity, it’s common for Champions to settle for something different from what they initially wanted if it feels right at the moment.

Changing plans is also very common for this personality type.

Today they may want to lead a traditional lifestyle in their hometown.

Tomorrow they may announce they are going backpacking in Asia.

When ENFPs begin to talk about their plans, their friends and family might roll their eyes.

They heard enough already, and they know tomorrow it will be something different.

If you would like to read more about ENFPs’ weaknesses and what other people find annoying about them, click here.

Because these imaginative innovators see so many possibilities, it’s hard for them to make a definite choice.

A lot of them feel like committing to one thing will automatically leave many other fantastic options unexplored.

This results in a hesitancy to make decisions.

They are likely to delay their career and marriage decisions until later in life.

But they are probably right to do so because their natural desire to look for a new thrill isn’t in line with that type of commitments.

ENFPs are keen observers of others and continuously scan their environment for anything suspicious or merely interesting.

Armed with their powerful intuition and ability to focus attention, they are superb in understanding people’s motives and predicting their next move.

Thanks to their extroversion, these sanguine-phlegmatic types are likely to share their intuitive insights about others.

Unfortunately for ENFPs, their insights aren’t always appreciated; more often than not, the people involved may find them very intimidating and even creepy.

ENFPs are pleasant to be around and typically have a wide range of contacts.

Their style is enthusiastic, positive, and inspiring.

Because they need others’ support, they focus on supporting others and may appear overly positive and insincere to some.

In reality, all they do is giving strokes to others in hopes to get strokes in return.

Other people’s opinions, their support, and appreciation are extremely important to ENFPs.

ENFPs fall in love rather quickly, and it’s not surprising because the ENFP is in love with the idea of love.

Once they get into a relationship, they tend to idealize their partner and study him or her extensively in every way.

Being extremely social and affectionate with everyone around them, ENFPs don’t have any difficulties in finding romantic partners.

ENFPs may seem like ideal mates; however, there are some serious downsides to being in a relationship with them:

On the positive side, however, having a relationship with an ENFP is never dull or boring.

Always young at heart, they will idealize and constantly entertain their partners.

Love-struck ENFPs will give you lots of chances and close their eyes even on the most glaring flaws.

Another interesting observation is that ENFP men tend to be more emotionally available than some other types.

ENFP Compatibility with Other Types

Some of the most common questions regarding ENFP compatibility with other types include INFJ and ENFP, ENFP and ESFJ, INFP and ENFP, and ISFJ and ENFP.

Both INFJ and ENFP tend to put a lot of effort into understanding their partners and establishing a meaningful connection.

They are drawn together by their shared values, such as empathy, emotional support, and harmony.

They share phlegmatic traits, such as the need for intimacy, connection, and understanding, and they differ in Sanguine- and Melancholic-specific characteristics.

In terms of the 16 personality types, they share two type preferences (NF), which brings the INFJ and the ENFP closer.

David Keirsey, an American psychologist and famous personality researcher, classified both as “Idealists”.

All Idealists are at least partially phlegmatic.

Back to our ENFP/INFJ couple, there are some differences as well, and these differences make them even more attractive to each other:

On the negative side, the INFJ wants things settled and organized while the ENFP wants to keep his or her options open.

The ENFP’s priority is to be able to take advantage of opportunities as they present themselves, but the INFJ wants to follow a clear plan.

The INFJ may feel uncomfortable and uncertain regarding some issues — all because the ENFP wants to feel free.

Also, INFJs may resent their ENFP partners because typically they end up doing more household tasks, such as cleaning and cooking and even paying the bills.

Finally, the introverted INFJ may become exhausted due to too many social activities, which are necessary for the extroverted ENFP.

Both have Sanguine tendencies or, in the 16 personality types terms, they share two of the four type preferences — Extroversion (E) and Feeling (F).

Both require a strong emotional connection, and both make choices based on their values.

The ENFP and the ESFJ are likely to be very passionate and supportive of each other.

They are also likely to have a very active social life that they both enjoy.

Although the two have a lot in common, they have some important differences as well, and problems may arise because of these different views.

Due to their Melancholic qualities, ESFJs tend to resist change and generally be on a conservative side.

Unfortunately, curious, active, and nonconforming ENFPs may become bored with this lifestyle and, being true to themselves, act boldly and spontaneously.

As a result, this may upset their ESFJ partners and cause them a lot of stress.

ENFPs want a work setting that is inspiring and stimulating.

Ideally, they should have a lot of freedom and as little supervision as possible.

In addition, they need to feel that their opinions are considered and that they are included in decision making.

A workplace with a lot of drama is not suitable for ENFPs.

Due to their people-oriented nature, they are likely to become distracted and waste a lot of time trying to repair the relationships instead of fulfilling their responsibilities.

ENFPs are eager to serve other people and do best in service occupations, such as consultants, counselors, journalists, and entertainers.

When it comes to leadership, they make energetic and charismatic leaders who are considerate of their subordinates. An ENFP leader will:

These famous people and celebrities are likely to belong to the ENFP personality type: