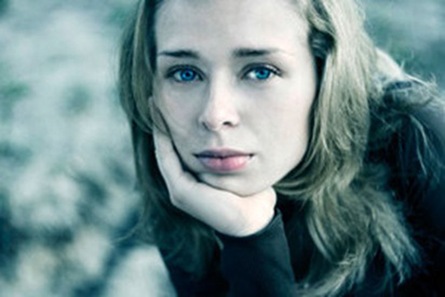 Raising the eyebrows is one of those universal eye expressions that is used in all cultures. The eyebrows are raised for a split second and then dropped back.

The purpose of this signal is to draw the attention of another person to the face so that other signals can then be exchanged.

It can also be a long-distance “hello” signal that is used unconsciously to acknowledge another person.

The person who doesn’t do it on an initial greeting is perceived as a potential threat or danger.

Send this signal to those you like or to those you want to like you. You will see that not only will many of them return the same signal with a smile, but they will also come over and begin to talk to you.

Widening one’s eyes by intentionally raising the eyebrows is one of the submissive eye expressions and is done to be perceived as less aggressive.

On the other hand, lowering one’s brows demonstrates dominance and aggression.

Lowering One’s Head While Looking Up

This facial expression belongs to submissive eye expressions as well. It makes a person appear more childlike and triggers parental reactions in people.

The “Sideways Glance” is one of those eye expressions that could have several meanings.

If it is combined with slightly raised eyebrows or a smile, it is a common sign of interest, and usually used by women as a courtship signal.

On the other hand, if it is combined with down-turned eyebrows or down-turned corners of the mouth, it means a critical, hostile, or suspicious attitude.

Regular blinking frequency is six to eight blinks per minute. However, if you are under pressure or you are lying, your blinking rate increases.

If you were talking to someone, and he or she displays increased blinking with their eyes staying closed a little longer than usual, this could mean that they are disinterested in what you are saying.

This is an intimidating gaze and should be used only when the situation calls for it.

Signs of Lying in Body Language
The Power of Eye Contact