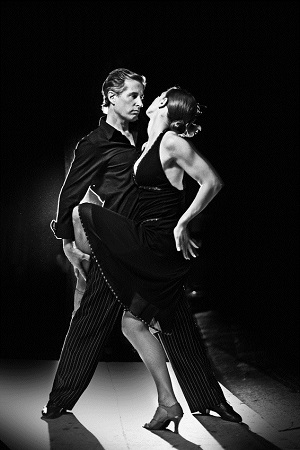 The main element of flirting body language is emphasizing sexual differences; highlighting these differences is what makes a person sexy to other people. According to Dr. Albert Scheflen, when a person meets someone they are interested in, certain physiological changes take place. The muscle tone increases, body sagging disappears, the body assumes erect posture, and the person appears younger and more attractive. A man will stand taller, expand his chest and look more powerful and dominant, while the woman will tilt her head, and touch her hair while exposing her wrists. Body language reveals how available, attractive, enthusiastic or even how desperate we are. Some signals of flirting body language are unconscious and completely natural, while other signals are studied and intentional; regardless, the core principle of flirting body language is emphasizing sexual differences in order to attract the opposite sex. Highlighting these differences is what makes a person look and feel “sexy”. (You may also want to see this: Infographic: Body Language of Men)

Numerous studies into courtship showed that women are initiators of a romantic encounter 90% of the time. They do it by sending subtle signals – eye, face and body signals that are sent to their targeted men. If a man was perceptive enough to pick it up, he would usually approach them. While some men approach even without any signals being sent to them, their overall success rate with courtships is low, because they are approaching even when they are not welcome. So, while it looks as though men do the first move, and many men themselves believe that they, in actual fact, in 90% of the encounters, it is not true.

From another perspective, many men are not very good at picking up and correctly interpreting subtle signals of female body language, especially if it was very subtle. They generally have 10 to 20 times more testosterone than women and they may mistake friendly smiles for sexual interest. In addition to that, many ladies like to send contradicting signals even when they are interested. This lets them gain some time to evaluate the men. Due to this conflicting information, some men will get confused and won’t make their approach at all, regardless of what signals are being sent out.

[INTERESTING: Body Language of the Hands: Common Gestures and Their Meanings]

Here is how the attraction process usually works:

First, the lady spots a man she likes. She catches his gaze and holds it for a few seconds, then looks away. He becomes intrigued, and keeps watching to see if she is going to repeat the same manoeuvre. She repeats it, on average, three times, so now he should have no doubts that he is definitely welcome.

It is actually possible to fall in love from mere eye contact. Details here.

She displays a quick half-smile, which is so brief that many times it is not even picked up by men.

He will approach and make some kind of small talk.

She will look for the opportunity to touch him, and once she finds it, she will do so seemingly accidentally. Then she will try to repeat the touch to see how comfortable he was with it.

Male flirting body language is usually not so rich. Normally, men display signals that display power, wealth and status and are not very good at sending or receiving signals used in courtship game; mostly they simply react to what they see. A man might straighten his tie, touch his watch, and brush imaginary dust of his shoulder.

The most aggressive signals of male flirting body language, include thumbs-in-belt gestures that convey authority, confidence and draws attention to his crotch area. He may also turn his body towards her, and point his foot towards her. On top of this, he may hold her gaze longer than it feels comfortable (see Eye Reading in Body Language). If he is sitting down, he may also spread his legs to emphasize his crotch. In fact, he may adjust his crotch right there in public – an attempt to assert his masculinity in front of the woman he desires.

The idea that most people are still motivated by the appearance, at least in the initial stages of a courtship, may seem disheartening to some of you, but now you know about the flirting body language signals, you have a clue as to how to make yourself more attractive in the eyes of the opposite sex.