You are here: Home / Body Language / Holding Hands in Body Language
Contents
» Personal space
» Keeping the distance
» Do they want to be touched?
» Cultural differences
» What does it mean when someone holds your hand?
» A word about dominance
» What to do when your romantic partner doesn’t want to hold your hand 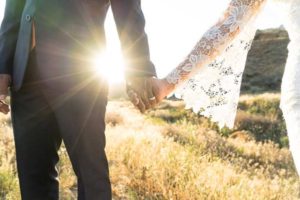 Just like any type of touch, holding hands can be a very potent signal.

Depending on how it is used, it can make or break the relationship.

It can break the other person’s defenses and force them to open up to you, or it can have a completely opposite effect by making them feel threatened.

When we attempt to hold someone’s hand, we invade their personal space.

Personal space is an important concept to understand. You can think of it as your personal air bubble that can expand and contract depending on circumstances.

Your personal zone expectations are much lower on a crowded subway train than, let’s say, at a party.

Generally, most people tend to treat the distance closer than 18 inches (46 centimeters) as their property [Source: The Definite Book of Body Language by Allan & Barbara Pease].

Very few people (and pets) can enter this space without making us feel uncomfortable.

This is the reason why “keeping your distance” is an excellent idea at the beginning of a relationship.

Not necessarily a romantic gesture, a touch should come at the right time and in the proper context.

Attempting to hold hands with someone whom you have just met may annoy the other person even if they smile not to offend you.

But as your relationship progresses, the other person will allow you closer into her or his personal zone.

♦
Do they want to be touched?

An easy way to find out whether or not the other person is ready to accept you in their personal space is to move your items closer to them.

In body language, you can think of your personal items (e.g., a handbag, cigarettes, etc.) like extensions of your body.

If you two sit at the table, there is an unspoken rule that says that half of that table is for you, and the other half is for the other person [Source: Body Language by Julius Fast].

Moving your items into the other person’s space will usually annoy them, and there will be a visible discomfort.

Only very close friends, family members, and lovers will not mind this gesture.

Some women will move their handbags towards the men they like as a flirtatious gesture; this is an attempt to communicate their readiness to become closer with that person [Source: The Definite Book of Body Language by Allan & Barbara Pease].

Just like everything else in body language, holding hands may be perceived differently in different cultures.

In the West, holding hands is viewed as a romantic gesture. When we see two people holding hands, we quickly make assumptions about their relationship.

Many Western men avoid holding hands with each other. But in Arab culture, holding hands between men is a friendly gesture that has nothing to do with their orientation.

♦
What does it mean when someone holds your hand?

Depending on the situation, holding hands with someone may mean different things.

Holding hands with a person of another sex is generally seen as a romantic gesture in most cultures.

Unless you want to be misunderstood, avoid holding hands with people you are not interested in even if they initiate the contact.

When a man grabs a woman’s hand, it could mean different things as well:

Some websites assign special meanings to different hand-holding styles, but they do not cite any references and should probably be viewed only as entertainment reading.

♦
A word about dominance

Most books on body language will tell you that when it comes to holding hands, the dominant partner’s hand always ends up on the top.

However, a Temple University study performed back in 1998 showed that there could be several other factors that affect the way we hold hands:

Holding hands in public is not for everyone.

Many people in committed relationships avoid holding hands in public because they feel uncomfortable with a public display of affection or feelings whatsoever.

This, of course, doesn’t mean that your spouse doesn’t love you. It only means they are unable to relax and let go of the idea that by displaying their affection towards you, they appear weak, vulnerable, and, perhaps, immature. There is no easy fix for this, but you could try several things:

You may also like Body Language of the Hands: Common Gestures and Their Meanings