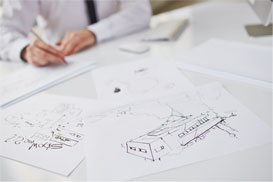 INTP is one of the 16 personality types developed by Katharine Cook Briggs and Isabel Briggs Myers in the first part of the twentieth century.

If you would like to get more information on the background of their theory, check out our Jung’s personality typology page, which includes some necessary disclaimers.

Back to Myers-Briggs work: Each personality type possesses unique gifts and inclinations that serve an important role in society; each personality is unique in its own way.

People with the INTP personality type account for less than 5 percent of the general population, with some sources citing even lower numbers.

While it would be impractical even to attempt to find exact numbers, nobody will argue that INTPs are rare.

Are you an independent and original INTP? You can take this scientifically validated test to find out. ⇧

INTP stands for “introverted” (I), “intuitive” (N), thinking (T), perceiving (P). Introversion is a preference to focus internally and spend a good portion of your time alone in quiet surroundings.

Being intuitive means that you pay more attention to general concepts, abstract ideas, and interpretations; facts and details are secondary to you.

Your inclination to use your thinking faculty instead of feelings makes you a highly rational person who prioritizes logic and reason.
Having a perceiving style means you are a flexible and spontaneous person. ⇧

Other Names for the INTP Personality Type

The INTP personality type has other names given by Myers-Briggs and those who later expanded on their theory.

Authors of the official Myers-Briggs assessment tool refer to this type as “Objective Analyst”.

To make it even more confusing, he sometimes used the word “Engineers” when talking about INTPs.

Alan Brownsword, the author of “It Takes All Types”, called it “Builder of Theories”.

Jonathan P. Niednagel, the author of the brain typing theory based on Jung’s and Myer-Briggs’s works, called this personality type “Creative Logician”.

Some online sources made up their own names for INTP: Logician, Rational Philosopher, The Inventive Logician.

How to Recognize an INTP

People with an INTP personality type often appear lost in their intellectual world.

Although they are great at organizing thoughts and concepts, they usually neglect the physical world, which may make them seem messy and disorganized.

Just like other introverts, they dislike the superficial and don’t bother with small talk.

On the other hand, they enjoy talking about abstract concepts, science, technology, mathematics, which usually results in technical and complex speech that cannot be easily understood by others.

Another important INTP trait is that they are more interested in underlying structures of things and principles that seem to govern these things rather than the things themselves.

Because INTP’s thoughts are precise and organized, their language is accurate too.

They pick up on inconsistencies in others’ speech very quickly and can be truly devastating in a debate.

Because they believe that one of their primary functions is the search for understanding, they will typically point out logical flaws, no matter the opponent.

Debates aside, INTPs often appear shy due to their preference to work quietly and alone.

Their natural reserve may be challenging to penetrate, and except for a few close friends, INTPs don’t really open up to anyone and are often underestimated.⇧

INTPs are very much interested in design and architecture.

These people possess fantastic spatial skills, and from an early age, they are preoccupied with concepts of space and orientation.

A typical INTP is obsessed with technology and will usually choose to study science.

Although they regularly spend a considerable amount of time learning non-compulsory materials, they prefer to explore at their own pace, which allows them the freedom to choose topics of interest on their own.

When it comes to hobbies, INTP favorites are

One Special Thing About INTP

People with INTP personality type look at the world a little differently than most of us; they see the world as a raw material — something they could influence, change or re-design according to their mental sketch.

Although INTPs are keen on knowledge, they know how to concentrate on the issue at hand.

With this deep and narrow focus, they are often capable of reaching a better understanding of whatever they are trying to analyze than others.⇧

INTP in Dating, Love, and Relationships

Although they take their relationship very seriously, they sometimes may be forgetful of important anniversaries and appointments.

When an INTP person chooses to focus on their relationship, they may appear to have a relationship chip on their shoulder.

In a true INTP style, they will analyze everything about their partner and their relationship.

In general, INTPs do not enjoy social activities in their homes and would rather live in their intellectual world.

Their partners must be prepared to arrange and schedule everyday social rituals themselves; they may also have to pay courtesy visits to other people alone as their INTP partners can’t be bothered with this type of activity.

Another possible point of conflict is that INTP men and women tend to keep their emotions to themselves and may appear insensitive to feelings of other people.

Their partners need to realize that demanding the rationale is the INTP’s attempt to understand them and not an insult to their feelings.⇧

When making a decision, INTPs carefully evaluate the problem at hand and consider all available options.

Because they tend to see many alternative solutions to the same problem, they might get caught up in analyzing the alternatives and postpone deciding until it’s too late.

Also, INTPs should realize that sometimes their decisions affect the lives of other people and, because INTPs are not very good at people reading, they may want to make sure that these decisions do not harm anyone.

Another potential problem with INTP decision-making is that they tend to get carried away in their thinking and might waste their time considering unrealistic options.⇧

INTPs’ dream job allows them to work on one project at a time and is sufficiently intellectually stimulating for them to stay interested.

To be completely happy at the job, the INTP wants freedom of action with little or no supervision and respectful colleagues.

Because INTPs are all about innovation and design, they thrive in high-tech fields with an artistic edge such as animation, graphic design, user interface design, video production / editing and architecture.

Due to their introverted nature, the INTP prefers to work alone or with a small group of colleagues he or she respects. Also see 19 INTP Careers to Avoid ⇧

Generally, INTP people don’t strive to lead, but if they end up in leadership positions, they prefer to focus on providing direction more than anything else.

In addition, they value individual knowledge and expertise over fancy titles and encourage input, which makes them very empowering leaders.

Because INTPs are highly independent themselves, they like people who can work independently as well. When faced with a specific problem, INTP leaders focus on understanding the underlying causes of the issue at hand and try to disseminate this knowledge to other members. ⇧

Heidi Priebe, the author of the book “How You Will Do Everything Based on Your Personality Type”, wrote an entertaining post for “Thought Catalog”. In that post, she assigned warning labels to each of the 16 personality types.

The label for the INTP personality type reads:

May fact check literally everything you say and catch you in any attempt at a lie or exaggeration.⇧