You are here: Home / Relationships / Dealing with Negative and Toxic People 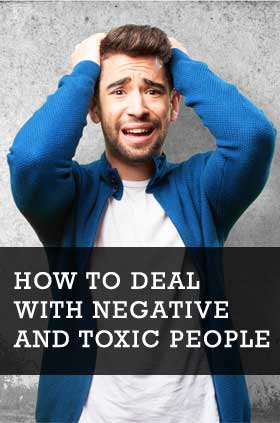 We all seem to have that one friend who is never happy. She keeps complaining about things, but no matter what solution you suggest, she will find a reason why it won’t work. Although you can never suggest a “workable” solution, she insists on keeping in touch with you, which makes you feel used and abused. You can’t help but wonder: Am I being used as a toxic dump site? Would she even remember about your existence if everything in her life was just fine? The answer is you probably don’t need to worry because given her natural disposition, she will always find something she isn’t happy about, and there’ll always be something to talk about.

But what’s the deal with negative people and how their psychology works? Most importantly, are they really bad for you? Can their negativity rub off on you and become your default operational mode as well?

Why are some people so negative?
Whiners and complainers keep nagging because they feel helpless. Not to say that negativity is a mental disorder, but many psychological problems develop because of the feeling of lack of control accompanied by an overwhelming desire to control at least something. Negative people feel weak and powerless over their environment and outcomes of their lives. To make things worse, they are unable to change their attitude or the way they feel about things. There are several factors that play role in this:

Yes, but…
Many of happier and more proactive people make a mistake thinking that every time somebody complains about something, they must be asking for their advice. They feel particularly frustrated that their every suggestion is met with “Yes, but…”, then discarded as something that won’t work.

What we all need to understand is that most of the time, pessimists nag and complain only to vent and validate their feelings. Talking about their problems gives them a temporary relief; they simply need an outlet to vent their frustration. However, it’s important to understand that they are not asking for your advice, nor do they get particularly happy when you suggest something. Yes, it must be hard to wrap your mind around this if you are an optimistic go-getter, which only proves that you two are very different people.

Not all pessimists complain
Not all negative people become annoying naggers. There are those who quietly suffer from their own negativity and deal with its consequences on their own. Unfortunately, their world is even darker, and they are very prone to depression. In that sense, they deserve our compassion.

Is being around negative people bad for you?
Venting is a part of human relationships. From time to time, we need an ear, a shoulder to cry on. We rant for a while, sometimes for a long while, then we move on. Not everything has to be “fixed”, and simply listening to a person is one of the greatest gifts you can give. However, there are people who take simple venting to a whole new level, and here is when it becomes dangerous for you as well. Here are some of the tell-tell signs of a toxic person:

Stopping the cycle
In a normal relationship where one person simply tends to get carried away while venting, you could break the cycle by saying something like:

But when the person you are dealing with is not simply pessimistic or negative but toxic, all these tricks won’t work. You need to be ready to give up on this person and literally walk away. Giving up on them includes not only letting them go but also their opinions of you. As we’ve already mentioned, truly toxic negative people think in all or nothing terms and will turn against you the moment you disagree or stop supporting them. There is not much you can do about it other than simply not being concerned with it.

How to become more positive
If you think you are being too negative, there are several things you could do: