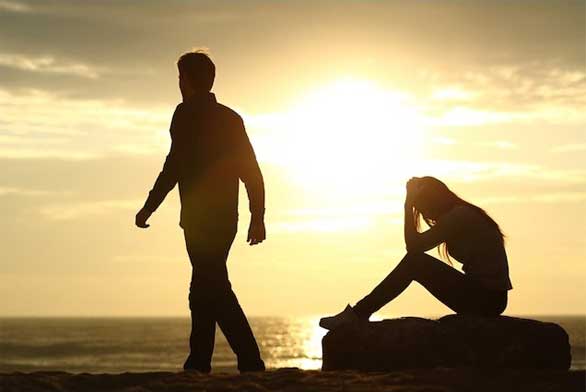 Psychological disorders can have different themes, and love and relationships theme is just one of them. Being in a relationship with someone who suffers from these disorders can be extremely difficult and exhausting.

As you will see, some of the signs can be easily mistaken for real love, particularly in the beginning stages of the relationship.

To make things worse, since the days of Romeo and Juliet, art and culture often seem to promote many forms of unhealthy love as if it were something to strive for.

This makes us more likely to form relationships with people who are truly ill, ruining ourselves in the process.

It feels great to be loved. The only issue is that many of us do not get that feeling every single day of our lives — perhaps our partners are not as passionate about us anymore, or maybe we are single and lonely.

It’s not unusual to crave love and attention, but people with erotomania take it to the whole new level: They believe that there is that one special person who is deeply in love with them.

To make things even more attractive, that special person often happens to be a celebrity or someone with a much higher status than the sufferer.

Supposedly, they confess their love via telepathic messages, special glances, and secret messages through the media.

If someone with erotomania decides that you are their secret admirer, it is pointless to deny your “feelings” — they won’t believe you. Instead, they will decide that you are trying to hide your true feelings from the world.

Another thing to be prepared for is that they will want to reciprocate: Expect phone calls, text messages, midnight visits, anything to keep “your love” alive.

Even more disturbingly, they might intentionally put you in danger so that they can offer you a rescue.

This obsession with you may last very long, much longer than a “regular” love.

Madonna’s stalker’s delusion (he believed that Madonna was meant to be his wife) was still alive and kicking even after serving ten years in prison.

Margaret Mary Ray stalked David Letterman for over ten years before shifting her attention to Story Musgrave. About ten percent of stalkers suffer from erotomania, and most of them are aggressive.

Having the image of your love object burnt to the back of your eyelids and intense feeling of passion is normal in the beginning stages of a romantic relationship.

Still, as time passes, your love for each other evolves into something less intense but more sustainable.

Healthy love is typically associated with a commitment and respect for each other’s needs, including the need for privacy.

Unfortunately, people with obsessive love disorder do not seem to get over the infatuation stage and remain overwhelmed by an obsessive desire to possess the other person while being unable to handle rejection.

If rejected, they might hurt or even kill themselves.

In some cases, people who love obsessively may stalk their victims, become manipulative or even physically control the victims (e.g., food and money control).

They may become unable to concentrate on anything else, which will negatively affect their social and professional lives.

At the moment, obsessive love is not categorized under any specific mental diagnosis, but some suggest it must be considered a mental illness due to its disruptive nature.

Attachment disorder affects people who didn’t experience a proper bond with their primary caregivers as children.

To form a healthy attachment, a newborn’s primary needs have to be satisfied. They include nourishment, touch, eye contact, movement, and smile.

In some cases, children fail to form healthy relationships with adults. This can be due to

As a result, the child (and later adult) doesn’t feel safe around others, and abandonment issues and a number of mood and behavioral disorders may occur.

When it comes to romantic relationships, an adult with attachment disorder may choose one of the two extremes (depending on their personality):

The first type is usually characterized by

The second type is characterized by

At the core of OCD (Obsessive Compulsive Disorder) is a fear (obsession) and a ritual to neutralize that fear or prevent it from becoming a reality (compulsion).

Before long, it becomes a vicious cycle where people with OCD get caught up in unwanted intrusive thoughts about their fears, followed by attempts to either prove these fears wrong or neutralize them in some way.

Unfortunately, things don’t get better, and fears don’t go away. Even more so, trying to prevent or neutralize the danger usually makes things even worse.

Common OCD themes include the fear of germs, the fear of harm to one’s self or others, excessive orderliness, and relationships (ROCD).

Relationship obsessive-compulsive disorder can be either

Relationship-focused OCD could involve doubts. People with ROCD may wonder

Partner-focused OCD is usually about doubting your partner:

To feel better, someone with ROCD will continuously check on their fears and repeatedly seek reassurance.

OCD, by its nature, is extremely disruptive. Not only does it involve the afflicted person, but it also affects everyone around them.