You are here: Home / Relationships / Romance Scams and Psychological Profile of a Perfect Victim

Scams are bad enough in themselves, but romance and dating scams take it to the whole new level — your money is lost, your time is wasted and you are left with a broken heart. Internet dating sites, even those that are regarded as “reputable”, are a playing field for cruel scammers who are hunting for the most vulnerable victims — divorced, widowed, abandoned, middle aged, elderly, women looking for a father figure for their children, desperate men looking for exotic lovers way out of their league in terms of looks.

Nancy (not her real name) is a woman in her sixties who is longing to have someone to share her life with. Reluctantly, she joined a “reputable” dating site and soon after creating her profile, she received her first request. “It was love at first sight”, she says. Little did she know that the perfect man she fell in love with didn’t exist. 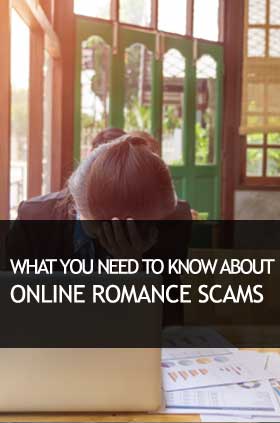 The fantasy man, let’s call him Mike, told her he was in military and deployed to a far away land — a good reason why they have to keep things virtual for now. They wrote each other for a while and things escalated quickly. Only after a couple of weeks, Mike proposed Nancy and she was ecstatic. Once she said yes, they began to plan their future life together. After all, Mike was about to return back home to marry Nancy and build life with her. He said his new business could make their dreams come true. Soon enough, there was a little problem: Mike had to make a payment for goods he was supposedly about to export but was unable to access his own money in a combat zone. He needed Nancy’s help. As manipulative as it sounds, he told Nancy their whole future was at stake. Although Nancy was feeling uneasy about the situation, she sold some of her assets and came up with $3,000 needed.

It hasn’t been long until another request followed, which made Nancy suspicious. After consulting her friends and later police, Nancy found out that Mike never existed. It was only one of thousands of romance scam cases that could be traced back to Ghana, Nigeria or other exotic countries. Military dating scams are so common that the U.S. embassy in Ghana found it necessary to publish a warning on their website.

Cases like this one are a good reason why you should always ask for more photos, preferably taken especially for you, insist on video calls and of course never ever send money or give your credit card details. Do not be afraid to lose the relationship with someone you have never even met — if they are genuine, they will understand your concern. If they aren’t, they will probably act offended and call it quits — congratulations, you’ve just saved yourself from being scammed!

It is not a condition that your fantasy partner will ask for money immediately — scammers are clever enough to be patient to build up your attachment and emotional investment. The more attached you are, the more likely you are to pay. They will typically wait between one and three months before asking anything from you.

There are several similar scams that don’t involve military but they always involve being somewhere far away from the victim and a sudden financial emergency. In some cases, a scammer will even agree to talk on the phone just like in this woman’s case:

Dan is an overweight man in his forties. He isn’t particularly wealthy and lives in a modest house in a small town. Dan has been single for a long time and his life is mind-numbingly boring. Dan is not the one to give up, however. He dreams of ideal love and his mate should look nothing less than a Hollywood star. The world is big, and it didn’t take long to find a woman that was perfect for Dan. She lived in Ukraine, but in his mind, it was worth it. There was another little problem though: Marina, his dream woman, didn’t speak English, hence, he needed translation services offered by the dating site. It continued for a while: Dan wrote Marina in English, she replied in Russian, and the translation agency translated their emails. Over the course of several months, Dan spent thousands of dollars on translation. To make things worse, Marina seemed to ignore his requests for her personal email address, forcing Dan to use message service offered by the dating website. Finally, it was time to meet. Dan packed his bags and flew all the way to Odessa to meet Marina. Unfortunately for Dan, she never showed up.

Fake dating websites like the one Dan used do not connect men with real women. Instead, they impersonate them and fabricate romantic emails. Pictures of women may or may not be real: Sometimes these pictures are taken from social media profiles of unsuspecting women or other dating websites. In some cases, good-looking women may cooperate with the agency just in case victims will demand to see them and threaten with a lawsuit. If this is the case, they may even organize a meeting with the woman, but eventually she will find a way to break “the relationship” anyway.

This usually begins on a dating site, then quickly moves to one of the popular social media sites where a scammer will try to steer the conversation to something sexual in nature. They will attempt to get your real name, your phone number and, if possible, your compromising pictures. Soon after that you will receive an email informing you that this information has been published on some website and can be removed for a fee. There is no guarantee, however, that the information will be removed once the payment takes place.

Psychological Factors: Who is Likely to Fall Victim

Scammers are constantly coming up with new ideas and even informed people can fall victims of online romance scams. However, there are some common personality traits that make it more likely:

In addition, women tend to fall victims more frequently than men, and it doesn’t matter whether or not they are highly educated [source].