You are here: Home / Relationships / The White Knight Syndrome in Men and Women

When it comes to the white knight syndrome, most people think of it as a personality trait that mainly affects males — a certain type of men who are attracted to women with problems. Devoting themselves to helping these women and rescuing them provides a huge ego boost, making them feel better about themselves and giving them a sense of mission.

However, this trait isn’t exclusive to men only, and it goes much deeper than scoring brownie points with the opposite sex. The white knight syndrome, also referred to as the Hero syndrome, affects a large number of women, and a relationship doesn’t have to be of a romantic nature for the syndrome to be present.

Earlier this month we wrote a post on people who feed off drama — it was a post about people who just can’t get enough of your problems. They get excited by your misfortunes and become overly enthusiastic about fixing things for you. But what may seem like a sincere desire to help is, in fact, an attempt to get more attention and control the other person.

The white knight syndrome is closely related to this phenomenon but with a little twist. In the beginning, white knights may be truly emotionally sensitive and caring about the other person. However, what once was a sincere concern may sometimes progress to a narcissistic desire

This is the reason why while many women dream of a relationship with someone who has the white knight’s traits, those who are in such relationships don’t think it’s that great after all. Depending on where your white knight falls on a narcissism continuum scale, cutting off a relationship can be notoriously difficult.

But what causes the white knight syndrome? It could be a number of reasons, for example:

In personal relationships, white knights typically have the following characteristics:

While it’s true that not every white knight’s case is a case of narcissism, any relationship that involves the white knight / damsel in distress dynamics is an unhealthy one. Even when the white knight isn’t particularly manipulative, the reality is that he still suffers from unresolved emotional issues and puts himself in harm’s way by seeking relationships with people who need rescuing. There are several reasons for that:

If you think you may have the white knight syndrome or if you need help dealing with a manipulative white knight, talking with a therapist is the best possible course of action. 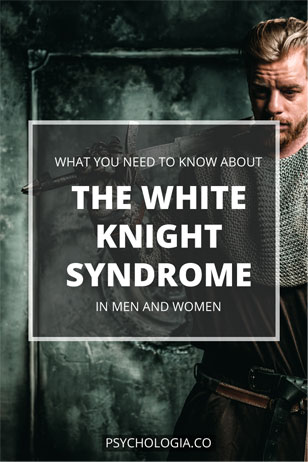